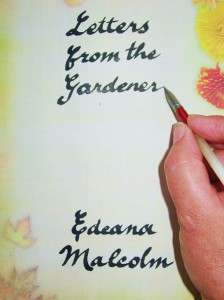 After a ridiculous amount of technical issues, I have finally published Letters from the Gardener, book 3 in my series of The Compleat Gardener. Please check it out. At least look at the cover and let me know what you think. I did it myself,  I’m no artist, and it’s different. Does it intrigue?

I think this book is actually my favourite in the series. I also think it is the least commercially marketable. It begins with a rather stiff eighteenth-century-style letter.  Every chapter begins with such a letter that relates the events of the day in Northern Ireland during the time of the French Revolution.  The Deans were fated to live in “interesting times.”

Between the letters lies the story of a marriage going through its own ups and downs. And did I mention the brother and sister team of the McCrackens, the handsome Henry Joy, founder of the United Irishmen, and his feminist sister, Mary Ann? There would have been a revolution in Ireland if they had had their way.

Enjoy the book! You can find it at smashwords.com/profile/view/edeana