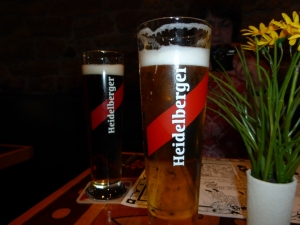 After our quick trip to France, we hopped on a high speed train to Germany and said good-bye to Switzerland. We found our hotel in Heidelberg near the Neckar River, the university and the Old City.

We walked around the neighborhood and then had dinner at a restaurant called Am den Gulderen Schaf (or something like that).

We struggled over the menu which featured a “Spargel Carte.” Did “spargel” mean “special” or maybe “seasonal”? Finally, Margo had “schweinschnitzel” and I had pork too, but prepared in the Pfalz manner

It looked and tasted a little like grilled spam on sauerkraut with hash brown potatoes.

The next day we went to the local museum, Margo to look at Roman things and me to learn some local 18th century history.

This is all you’ll see of that since we weren’t allowed to take our cameras in. It was a maze and in the section I was interested in, everything was written in German only. I left little wiser than I went in.

After that we left for Trier. We were on a high-speed inter-country train bound for Paris when we got out at the last stop  before the border to catch a regional milk run. Still we enjoyed the scenery along the Saar River.

At Trier, we stayed at La Prima Vera, which had a restaurant with Italian food. Margo felt that she’d had a long enough break from it and we’d both had enough of German food already, so we ate there. This restaurant had a “Spargel” menu as well. The light began to dawn. “Spargel” was the white asparagus we’d been seeing in the marketplaces! 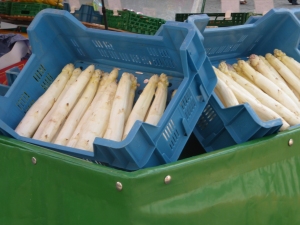 Large white asparagus in the market

The next day was another Roman ruin day. It is best I leave the description of such matters to the expert. If you haven’t been following Margo’s blog “Musings and Mosaics” I suggest you do.

Here’s me at the Forum Baths, delighted to meet live Romans for a change!

But I will tell you one interesting fact that I learned at the museum. Romans used to import asparagus from this region! Bet you didn’t know that?

Wein Schif or Roman river boat (with a cargo of asparagus maybe?)

After all that walking around Roman ruins, we were hungry, so we went to our hotel for supper again. It was Friday, our traditional pizza night at home, so here it is to round off my first German blog.