In the Eisan family Bible, it was written that “Michael Eisan married for the third time at the ag 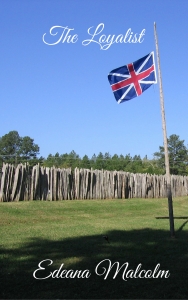 e of 101 and died of his excesses at the age of 103.” That was enough to convince me to write about this man who was my four times great-grandfather. Thus began years of research and writing culminating in my historical novel The Loyalist.

The story begins in 1831 in Ship Harbour, Nova Scotia, where 100-year-old Michael proposes to Sarah Lawrence, a 30-year-old widow with a young son. It chronicles the last two years of Michael’s life as Sarah tries to get to know her elderly husband, while suffering the resentment of his children, especially his oldest daughters, Janet McCarthy and Lizzie Eisan.

As Sarah questions him about his past, Michael has frequent and progressively longer flashbacks to his experiences during the American Revolution when he fought for the Loyalist militia in South Carolina. He revisits his unhappy marriage, the horrific events of the Battle of King’s Mountain and the Siege of Ninety Six, and his life as a refugee.

The novel continually shifts between the present of 1830s Nova Scotia and Michael’s past. Gradually, he drifts back to his earliest memories as a boy in the Palatine area of what is now Germany, as a young soldier in the Seven Years war, and finally, as an emigrant to the New World. Suffering a stroke, he relives his experience as part of a large group of settlers abandoned by their patron in London while on their way to Nova Scotia in 1763. Michael’s first wife dies in childbirth on Whitechapel field and is buried in the churchyard of St. George’s Lutheran Church. Finally the citizens of London assist these Palatine immigrants and King George III gives then land in the back country of South Carolina.

As Michael Eisan travels to the shore of South Carolina in his memory, he lies dying on his bed in Ship Harbour. The reader comes to understand why Michael remained a committed Loyalist during the Revolution and why he married Sarah– as an act of atonement for the tragic death of his first love.